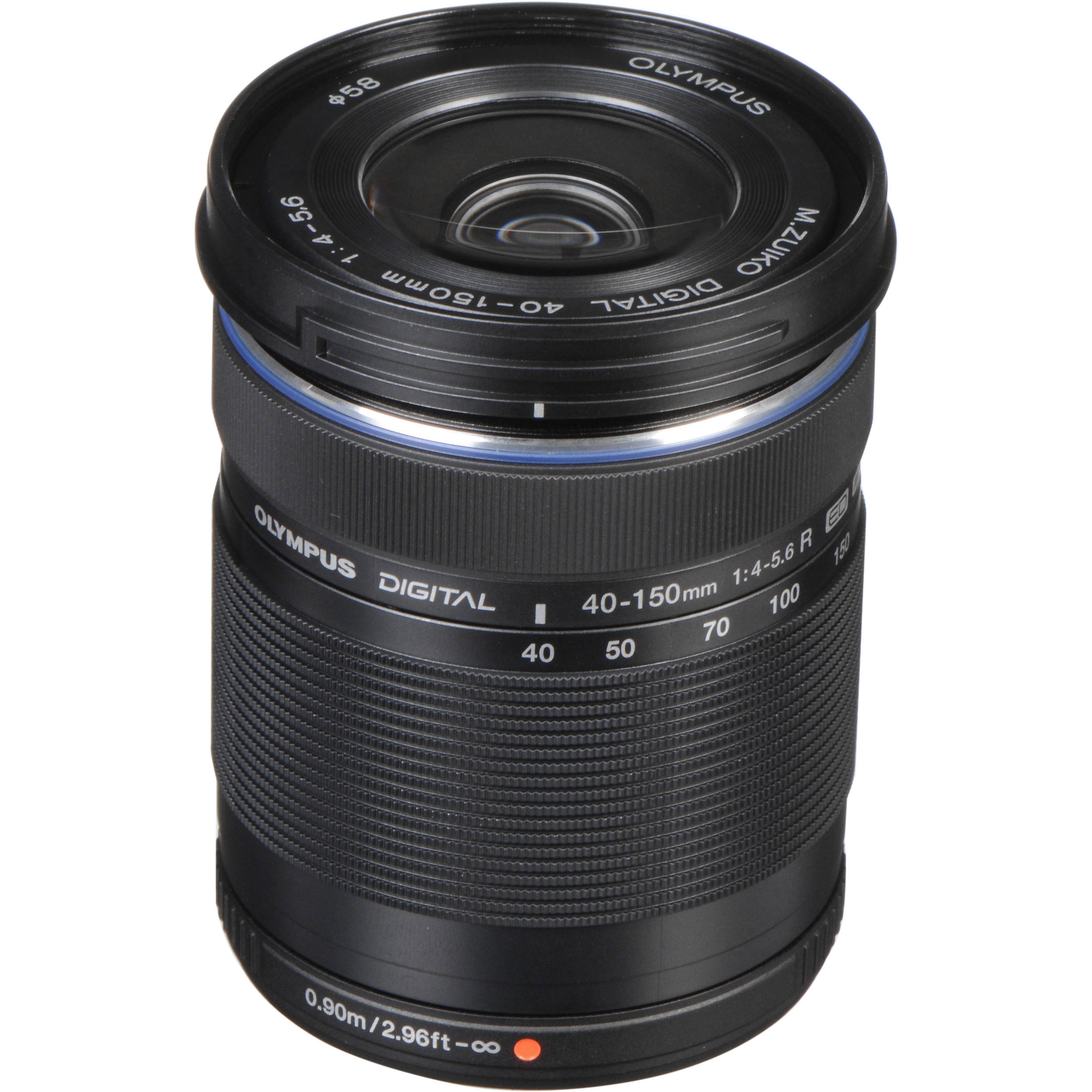 When in manual focus mode, the ring has hard stops and minimum and infinity distances, otherwise the lens will rotate freely in either direction while in the AF position.

Even with the clever retractable lens hood, the lens is able to pack away into small camera bags with ease, making it much more convenient to carry around.

The balance is great with the E-M1 and handholding this combo is very comfortable for extended shooting periods.

Speaking of lens hood, the included hood with this lens is indeed rather clever. While it's a removable bayonet-style hood just like many other lens hoods, it isn't reversible.

Instead, what you attach to the front of the lens is actually an inner bracket mechanism and with a little leftwards twist the lens hood disengages and slides down over the lens barrel.

Nevertheless, the lens hood still adds bulk with about 7. There's some other trade-offs as well. While the "R" model is a sharp lens, it displays more CA, more vignetting, and more distortion stronger barrel distortion at shorter focal lengths before transition to some pincushion distortion at the longer end.

However, the size and weight is significantly less compared to the Pro version thanks to the variable aperture and polycarbonate construction.

It's also tremendously more affordable. However, the focal lengths are slightly different. The Olympus isn't as wide but zooms out further, while the Panasonic sticks to the more traditional mm-equivalent focal length range.

The Panasonic lens is also very sharp and has very little distortion and very minor CA, but vignetting is higher than the Olympus, at least at the shorter focal lengths.

No longer are professional and enthusiast photographers beholden to their large, heavy DSLR telephoto zooms if they want a tele lens with bright apertures, rugged weather-sealed build quality and compatibility with teleconverters.

Not only are images tack sharp and the build quality outstanding, but the size and weight is also refreshingly light for such a lens.

The Olympus lens measures up at around 6. In short, if you want the best, premium telephoto zoom lens for Micro Four Thirds currently available, this is the one.

The VFA target should give you a good idea of sharpness in the center and corners, as well as some idea of the extent of barrel or pincushion distortion and chromatic aberration, while the Still Life subject may help in judging contrast and color.

We shoot both images using the default JPEG settings and manual white balance of our test bodies, so the images should be quite consistent from lens to lens.

For the ''VFA'' target the viewfinder accuracy target from Imaging Resource , we also provide sample crops from the center and upper-left corner of each shot, so you can quickly get a sense of relative sharpness, without having to download and inspect the full-res images.

To avoid space limitations with the layout of our review pages, indexes to the test shots launch in separate windows. I've owned this lens for several years, and together with the M.

I've found it to be reliably sharp wide open, at every focal length. It's 40mm to mm range makes it a versatile optical tool. It is competent for bird and animal photography, so long as the subjects are not a long way off.

In a limited number of circumstances, it even makes a good landscape lens. All that said, it really excels in portrait and news photography, allowing one to achieve beautiful portraits, head shots, and more.

I love the clean detail and accurate eye focus I routinely achieve when taking photos of people using this lens and the E-M1. While not a true macro, at mm it will focus close enough to allow sharp and detailed images of subjects that might not appreciate closer inspection from true macros, or lenses with shorter focal lengths.

If I have any complaints about this lens, it is the somewhat busy bokeh that can appear in certain images when the lighting and distances conspire in just the right way.

I have also found that the retractable lens hood, while very convenient, should be treated with some respect. The hood mechanism definitely doesnt like the kind of fine grit that can accumulate in some sandy and windy locales.

That said, the lens seems very comfortable in wet or cold conditions. On an EM-1 this lens is incredible. Easily the most convincing lens I have handled.

But now I can without a doubt recommend this lens to anyone considering it. Invest in your lenses above cameras is still true for modern digital age.

I pre-ordered this lens with convertor when released. I only occasionally use the converter. Even though I've scratched it a bit , I have never regretted the purchase for a moment.

Want a close shot of something small and timid? This is as good as it gets. Want model shots including tightly cropped faces with good OOF?

Wish granted. Focus is very reliable and it follow-focuses fast especially if you turn EYE focus off - more so with the mk 1.

Most of us could hold it all day with a grip strap. I do and I'm not young. In the s many of us would have committed several crimes to have such a lens.

Very sharp, reasonably compact and light for the aperture and focal length and has the fabulous Olympus push-pull manual focus collar. This lens exceeds the capabilities of the Olympus OM-D E-M5 1st version and on that camera, the reliability of the focus sometimes lets things down although I think this is the camera and not the lens.

I am sure it would be better on more recent Olympus models but I don't have the money to upgrade.

While used in conjunction with the companion tele-converter, it still gives fabulous, sharp images, I find the focus misses are compounded.

Image quality wise, with messy backgrounds, the bokeh could be better. It's a really good lens. And there are some nice innovations in it, that make gear heads like me go nuts.

Dual element focus two groups each with linear motors. There seem to be some improvements in autofocus speed but primary a really, really close focus distance.

This is great! Furthermore the lens is good optically. It might not compete with the best of the class Canon , Fuji , but it covers a greater range than those two.

But it's not cheap - I'd say it's worth it but probably should be few hundert bucks less. Again - the thing that disappointed me the most was, that this lens seems like the be optimised for close focus distances.

The sharpness while still great gets a bit worse, when focussing at infinity. But the Bokeh is the main problem. If you have a busy background the out of focus rendering gets really bad.

Don't know why Olympus is having so much problem with this. Brilliant lens in all aspects. They are perhaps a bit harder and less nuanced than shots you can get with the more expensive PRO lenses, but as long as you do not place them next to each other, the difference will not even be that visible.

Zuiko Digital. The distortion is small, with 1. Around 65mm, the lens is almost neutral, and then the distortion becomes very slightly pincushion-shaped.

In jpeg, the values are even lower, and thus better, due to the built-in profiles. Chromatic aberrations are corrected directly in the camera and are absent in both RAW and jpeg files.

Vignetting is also very low, which contributes to the perception of image quality. The image quality is especially high at the somewhat shorter focal lengths.

At 40mm, it already achieves a nice center sharpness where only the corners lag behind. But stopping down one stop makes the entire image evenly sharp with this lens.

Around 60 — 70mm, this lens is at its best, with a nice, even sharpness at full aperture. At mm, we see mostly the same, although everything is just a fraction less sharp, and at mm, the sharpness decreases a bit more.

But the results can still be called good at the longest distance. Zuiko Digital, you can still get some bokeh with it, especially when you photograph a small subject with the longest zoom setting.

For portraits, it is a lot harder to really get a nicely blurred background. The shortest setting distance is also not that short, at 0.

The largest magnification is thus 0. Not bad, but not remarkably good, either. Zuiko Digital is a telephoto zoom lens that is light, small, inexpensive and good.

It is not a lens with which you will quickly impress other photographers. Until you show them the results. And with that, it is a real gem.